What if misery was a product? 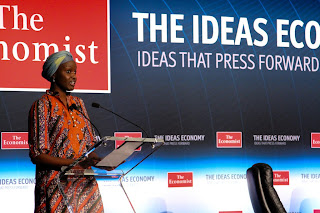 
What if misery was a product?

Assume for an instant that it is one of Africa’s exports and that the money sent to relieve it by many well-meaning humanitarians, is a form of capital.

The amount of capital expended to purchase this product, makes it as great an export, if not greater than Nigeria’s oil or Congo’s gems.

Imagining this was part of a discussion I had with a good friend a few nights ago.

While the debate on aid’s ineffectiveness continues, the scary thing for me might be that it is not merely ineffective, but that it is in itself a form of investment in misery.

I would like to argue that it is a choice to invest in pain and suffering, rather than in aspiration and potential.

I am presenting this as a STARK choice.

Take a slum for example; the blind pessimist sees derelict ramshackle structures full of suffering people, while the enlightened optimist recognizes them as an expression of millions of dreams and aspirations, a stage in the life of its occupants.

They are full of rural to urban migrants whose journey is in search of an electric bulb instead of a weak kerosene lamp; she hopes to replace her old log fire with a gas stove; she is saving to buy a new sofa and to send her children to a better school; she wants to replace her small radio with a television set; she wants to move to a better neighborhood sometimes one that is even in the same slum, he is saving to buy the new cheaper Chinese bicycle to run a increasingly common form of taxi in his town. This OPTIMISM sees consumers, entrepreneurs and workers and builds a business around them where the PESSIMIST sees victims and helplessness.

But it is not just the pessimist and his humanitarian capital that refuses to see HUMAN POTENTIAL. It is the great businesses of the world that believe that all that Africa has of value lies under its soil. They will INVEST BILLIONS of dollars to dig holes in the earth and then roads and railways to the port to carry this mineral out to the rest of the world. The returns are substantial and they will continue to be. But that is like folks who go to Africa to see the animals, then want Africans to adjust their life styles to accommodate the animals’ well being without ever really visiting an African home.

Even banks, telecoms companies, and the automotive industry that have operated in that landscape for up to a century are just recently waking up to the fact that the low income segments of the population surrounding them, like ALL other HUMAN BEINGS, share the same needs for financial services, communication and transportation in order not only to actualize their potential and realize their dreams, but to facilitate their efforts to meet their basic needs. Following this realization, the aforementioned industries have in the past decade and a half evolved their business models to reflect the landscape they are operating and in, and in so doing, discovered enormous returns and growth in Africa.

This is only the beginning. Alongside the larger players such as telecoms companies, are thousands of small and medium-scale entrepreneurs surrounded by opportunities for growth and profitability that are blocked merely by the lack of access to ready investment capital.

There are good reasons why much of this capital is not forthcoming: for instance anti business regulatory regimes, and difficulties in starting up and sustaining businesses due to political risk factors. But Mckinsey in a series of reports on African economies has found that outside active war zones, many of the continent’s countries present only a moderate political and economic risk. The broad generalizations that label the African continent a zone of failure and business losses are plain wrong. They are a part of that same pessimism that insists that the only products worth investing in are MISERY and MINERALS.

To turn toward the woman in that slum and focus on her aspirations is a matter of SEEING HER. This is what it is to acknowledge and then act on HUMAN POTENTIAL. What Julian Simon calls the ‘ULTIMATE RESOURCE, which is the human being’s imagination, ambition and intelligence.

I see an Africa in which entrepreneurs are increasing in number everyday. Countries that have barely been independent for two generations but that have developed thousands of doctors where there were none, thousands of architects, entrepreneurs and computer programmers. There may be soldiers in Eastern Congo causing untold misery but many countries have soldiers with conscience, and public servants with an integrity that makes them fight corrupt daily.

It is in Africa and not China, Indonesia, Brazil or Vietnam that the world’s highest returns on investment are to be found. Africa is on the rise. A business model developed to deliver goods and services for low-income consumers has significant potential to be competitive in higher income environments. Companies that are blooded in Lagos, Sao Paulo, and Cairo can become the winning companies in New York and London.

How can we train ourselves to appreciate HUMAN POTENTIAL when it is not served to us on a familiar platter? How can we learn to see anew so that the vast slum with its huge numbers of working struggling people appears not merely as a canker but instead as a beginning, a place of enormous energies that can create immense wealth and prosperity.

How can we learn to discern the order underneath the apparent chaos of a Lagos in Nigeria and then proceed to build enterprises on that order?

There will soon be a billion Africans, most of who will live in cities.
They will live in complex social systems and be part of robust networks of exchange and obligation.
They will expect to educate their children, to live in better housing, have access to better sanitation and health care.

To see value, to get to it earlier and thus build on it first, means recognizing other people’s fights for freedom and their hopes, even when they come in a different language and might be housed in a slum or a poor hut. This is not an education of mercy and humanitarian interest: it will be an essential tool to prospering in the near future.
Posted by Neema at 3:05 AM No comments: